If you’ve ever wanted to use motion capture for any of your A:M models, but thought that it was probably too complicated, then this tutorial is for you.

In this tutorial, I will show you how to add a calibration pose into your model that will allow you to import and use motion capture data with the click of the mouse. While I’m going to be using BVH files for this tuitorial, you can repeat the set-up for several different types of motion capture devices. NOTE: version 9 of A:M doesn’t support motion capture but it was restored in Version 10. This tutorial is done in version 8.5p+

Import the model or skeletal rig that you want to use motion capture with. In this example, I’m going to apply this set-up to a basic skeleton. At Zandoria Studios, we use default skeletons that are set-up with spherical limits, kinematic constraints, and fan bones. Since these poses are assigned to a simple skeletal model (with no geometry), you can use the “import model” command to bring in an appropriate skeleton with all of the rigging set up. Once this motion capture pose is created, all of the models that use this rig will be automatically set-up for motion capture. In A:M version 10, there is an “autoassign bones” feature, that makes this workflow even faster!

Right-click The “shortcut to BioVision BVH File1” and choose “Capture Sequence”. This will load the BVH file into the Action.

Now you have to make some Constraints that will make your skeleton move and orient like the BVH file.
Use a “Translate to” to lock the hip of your skeleton to the hip of the BVH. Follow this constraint with an “Orient like”– Use “compensate mode” to keep your skeletons hip/pelvis from moving when you apply the constraint.

In this example, I used “Orient like” constraints to align the bones of the torso and upper body to the BVH skeleton. You can pick the constraint targets with the eyedropper tool, just as you normally do when making a constraint.

Once your skeleton is constrained to follow the motion capture, create a Pose from the Action. Be sure that the Key filters are set as shown below. Name your pose “BVH” and save your model. This pose will now be usable to load any BVH file that is set-up the same way. 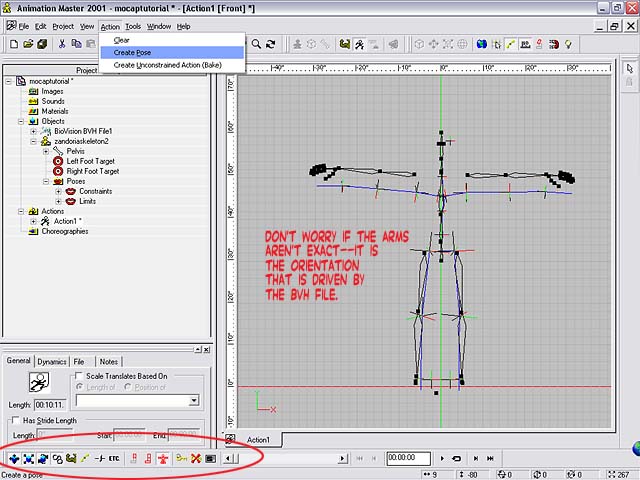 To load a new motion capture file for your model, create a new action and drag-and-drop the “BVH” pose into the action.

Right-click the channel for the “shortcut to BioVision BVH File1”. NOTE: Do not right-click the shortcut, make sure that it’s the channel. Choose “Capture sequence” and load the BVH file that you wish to use. 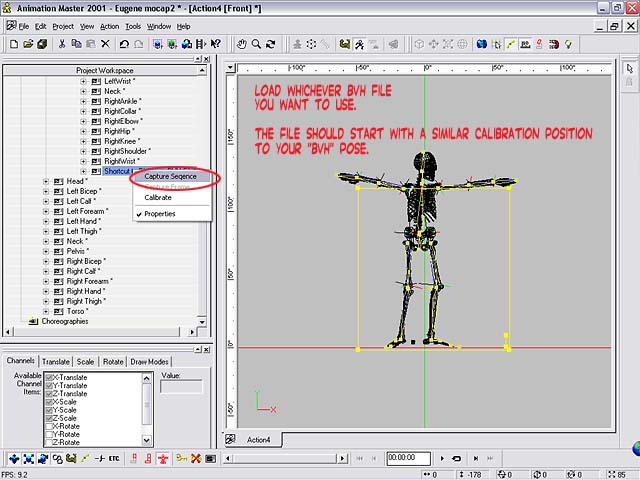 Your model will follow the new BVH file, it doesn’t matter which file you used for making your constraints, just be sure that the BVH file was set up the same way. You can find lots of free BVH files on the web to practice with.

If you have found this tutorial valuable, please make a contribution!